Here in the northern hemisphere summer is in full swing, and for people of my age that means one thing: weddings. This past weekend a science-friend and I attended the wedding of a mutual friend, who is a rising star in the world of acarology, so naturally we ended up seated at the table with a bunch of other scientists. What ensued bore some resemblance to a mini-conference, with light banter about our research, and how we knew Wayne. Nautrally this entailed a trip down memory lane to my undergrad (Wayne and I were labmates during my honours project), when summer meant something very different - it meant field season. 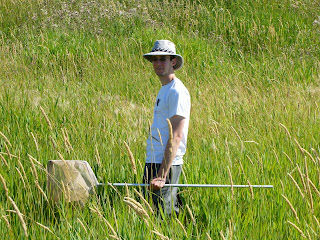 Back in my younger days field season was a big part of science for me. In my undergrad I made massive collecting trips across Alberta, Saskatchewan, and the North West Territories (camping out on some collecting trips, and jumping out of helicopters on others), and during my masters I visited many lakes to gather inocula for my outdoor mesocosm experiment. Aside from providing the chance to be outdoors, an element of field work that I think we all like, this active field involvement also allowed my data to have at least a sheen of ecological realism. Both of these reasons make the call of the field beguiling, almost irresistable. The trade-off, however (there's always a trade-off...), was that it can be incredibly hard to assign any kind of mechanistic explanation to the complicated, ecologically-relevant systems that we often study in the field. 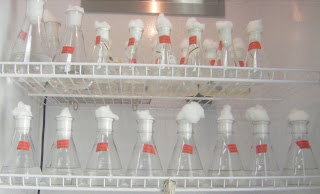 As a result I now spend less time outdoors, less time invested in ecologically relevant systems, and more time with 125 mL erlenmeyer flasks and two species diatom systems. In terms of data, things are lost (like the realism), but things are also gained (explanatory power and control). The same is true on a personal level: I've lost the sheer fun of playing in the mud and paddling madly to get off a lake before the thunderstorm hits, but I've gained the ability to engage in journal clubs, concerts, and movies during the soft summer evenings. And, who could forget, weddings.
Posted by michael at 12:52 PM