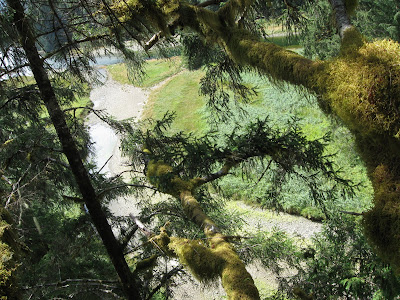 It’s been a great month for me, here on the westcoast. I’ve been visiting friends, family, cat, car, etc. on Vancouver Island, and doing some canopy sampling while I’m here also. The project, called ABASS (Arboreal Biodiversity Across Spatial Scales), was initiated at the end of my PhD, and this year I went into the field to collect HoBo dataloggers and a few arboreal moss samples. So, it’s a working vacation of sorts. But it’s the kind of work that I love to do. Firstly, the field sites are some of the most spectacular in the world. And secondly, because it’s an area that I have a connection to, as a scientist, and also because it’s home and I have history here.

This year I visited three sites in Clayoquot Sound UNESCO Biosphere Reserve on the west coast of Vancouver Island, just north of Tofino, BC. This is ancient temperate rainforest, and canopy samples are collected from 60m Sitka Spruce trees of coastal estuaries.

Of the three sites (Sydney, Watta, Moyeha), the Sydney is my favourite; mostly for it’s pristine forests, amazing wildlife, and sheer isolation. It’s located 1.5 hours by boat from Tofino, and about 45 minutes north of the village of Ahousat, where the new national chief of the Assembly of First Nations was celebrated just last week. In the Sydney it’s just water, rock, trees and sky as far as you can see. 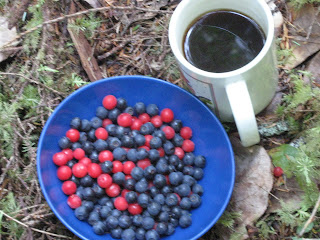 A typical day in the field started with collecting Blue and Huckleberries from around the camp site before canoeing off to the estuary. This year has been phenomenal for berries all over Vancouver Island, and the Huckleberries were the biggest I’ve ever seen. I work with a professional tree climber (Kev the arbornaut), who has climbed over an estimated 15,000 trees in his career (he stopped counting at 10,000). Our task is to climb 12 Sitka Spruce trees in each of the three watersheds, and collect dataloggers and moss samples for extraction of microarthropods (mainly mites). Climbing big trees, it always amazes me that they are just plants, related to a piece of celery or an African violet, and here I am clumsily climbing up them like an ant crawling up a blade of grass. At the top you can feel them sway in the wind. 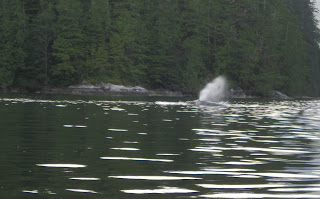 Of course, also on a typical day in the field, you need to accept the good with the bad. Good parts were napping and swimming in the estuary, and watching a Humpback whale lunge feed for pilchards in the inlet for 4 hours, while we sat on the rocks, drinking beer and eating oysters. The bad parts were falling down and bashing my knee on the rocks in the dry riverbed, getting stung by a bee and having my whole arm swell-up to the point where I couldn’t bend my fingers, and stabbing myself with my pocket knife.

But, it’s almost time to wrap-up and return to Montreal. I’m anxious to get back into the lab and start some new experiments, play with moss, and see some new mites. We have at least one new addition to our lab starting sometime this fall, so it should be an exciting time in the Gonzalez lab as some people finish up their projects and new ones get underway.

I hope everyone had a great summer, and I’ll see you all soon. 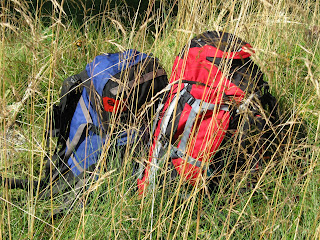