Where is Schefferville, Anyway?

Cross-posted from my other blog

Yes, I'm spending the next 2 full weeks at the McGill Subarctic Research Station in Schefferville, Québec, sampling my field experiment with moss & their associated micro-ecosystem. And the most common question I get is: “Where is that?” *sigh* If only I'd found a reason to do research at the Bellairs research institute in the Barbados, I might have avoided this question :P 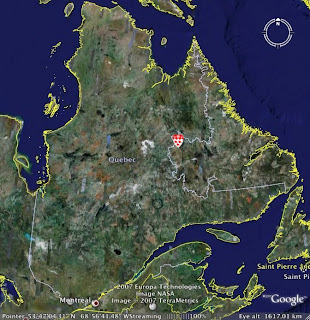 Schefferville is in northern Québec, near the border between Québec and Labrador. So close, I could easily walk to Labrador in a few hours from town. Getting to Labrador City would take a little longer ;-)

Formerly known as the town of Knob Lake, Schefferville was home to a mining community until the iron mine closed in the 1980's and most people left. It has since been a destination for hunting, fishing, and other outdoor activities, facilitated by the outfitters based in town. There is, however renewed interest in iron ore mining in the area, though not by the same company that built the railway. As far as I know, Schefferville has one school, an arena, sports field, one general store, a hardware store / snowmobile repair shop, a combination Dépanneur & SAQ Express (alcohol counter), much of it owned by the same man. There are also at least 2 bars in the area, although I was told not to go to a certain one unless I wanted to get into a bar fight. The airport is actually much closer to town than the train station, although there is a taxi from the train. It doesn't look like one, and is in fact an old ambulance past it’s prime, but you can ask around and someone will point it out when it comes.

I've been impressed with the depth of the scenery here: the land and the sky have a distinctly more three-dimensional appearance and feeling than in an urban environment. Even the sky has more depth than I remember in Vancouver, with usually at least 3 layers, making for some striking and beautiful sunsets.

I made a little flyby tour of the area in Google Earth, including my study site. I am such a nerd.