The downside of blogging

I was recently at a dinner party where I was talking to a fellow who was very anti-blogging. His position was basically that communication is context dependent, and the internet is the antithesis of context dependent communication. I'm sympathetic to his position; in a broad, context-free setting like the internet I think it is nearly impossible to make statements that aren't somehow naïve or asinine, and as a result I have been increasingly attempting to communicate with images. I have always appreciated Barthes' assertion that photos say nothing more than "this has been," and I find the notion that photos offer a 'silent discourse' attractive, or at least intriguing (thus my fascination with Edward Burtynsky's pictorial/textual ambivalence to ecological disaster). Ultimately, however, I acknowledge that attempts to communicate with images are no less naïve than attempts with text in the internet's context free environment. Images without textual anchors may be considered silent in one sense, but, as Susan Sontag has noted, in another sense they make extremely loud ethical statements. Finally, even if images could be considered truly 'silent', there are hefty ethical implications to the act of silence.

I started this post describing a personal conversation about the importance of context in conversation. Ironically I have now transported that conversation's content from a closed-format communication into an open-format communication (this blog). If I have done so I think it must be because I still believe there are important things we could be saying to people outside of our immediate spatial and social environments, and one of blogging's strong points is that it allows us to do just this. So here is my resolution for this blog: to return to textual communication, and to speak to whomever wishes to listen. Just don't take what I write out of context. 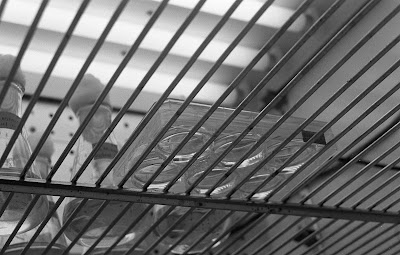