Life as a Postdoc

After several years of jobs being scarce, this year has been promising for those of us looking for a full time job in academia. But interviews have come and gone, and no golden ticket yet.

I am preparing for my next interview which includes not just the job talk, but also a chalk talk. I’ve never seen a chalk talk, and as far as I can tell, it is like a round-table discussion on your future research projects, but with timelines, goals, and funding strategies outlined on a board. I’m terrified.

I have plenty of preparation done, as I’ve though a lot about my future research and success of my lab, but mostly it’s in the form of written proposals. And it’s written down for a reason – 2 actually – firstly, I have a horrible memory, and second, I’m a better writer than I am a salesman.

The fact that this interview is also in the States means that there is a whole other level of insecurity; not being totally sure of how NFS grants are awarded (versus NSERC), what grad student culture is like, or what do you do for 3 months if you have a 9 month appointment. 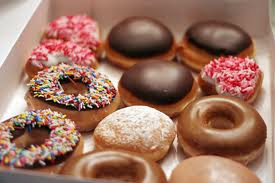 The lab has been great in supporting me though. On Monday many Gonzalites showed up to eat donuts and hear my job talk. If only the hiring committee could be bought as easily. Mmmmm donuts!
Posted by Zoë at 11:27 AM